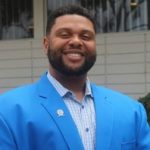 Rahsaan was elected to the Compton High School Alumni Association in 2015. Rahsaan was born and raised in Compton and neighboring city Lynwood, Ca. He graduated from Lynwood High School in 1995.While in high school Rahsaan followed his passion and love for music through playing alto saxophone in the jazz band. Thereafter, he attended California State University, Dominguez Hills from 1995-2001, where he graduated with a Bachelor of Arts in Mass Communications. Rahsaan received his Masters of Science in Education from National University in 2006. After contemplating a new direction in life and career choice after graduating from Cal State Dominguez Hills, Rahsaan decided to take on the task of becoming a school teacher following in the footsteps of his parents Thomas and Alice Campbell, (both of whom are natives of the City of Compton and graduated from Compton High School in 1968). Since 2002, Rahsaan taught both in elementary and middle school in the South Central and Watts areas of Los Angeles. After transitioning out of the classroom, he was an instructional coach responsible for providing support to teachers and school administration with instructional strategies to help support student learning and growth. Rahsaan is also the CEO of his own start-up education/tutoring company. Rahsaan is proud to serve on the Compton High School Alumni Association , in honor of continuing the legacy of his parents and relatives (Belita Shipman-aunt and Michael Shipman-Uncle) who all were alumni of Compton High and were members of the community.