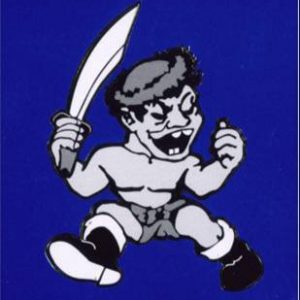 In 1896, Compton High School was a one-room School House. It graduated its’ first senior class in 1898. From 1898 to 1901 the student enrollment was 153 students, which was larger than its beginning.

Back then the girls wore ankle length skirts because pants were not permitted. The boys wore suits and ties. During this time the school mascot was not a Tarbabe, as it is today, but rather a Lion. The colors were Maroon and White as opposed to our current Columbia blue and White. Between 1914 and 1925, the student body increased to a whopping 1,000 students thus forcing the major construction of twelve new buildings.

Two years later (1927) a community college was added to the campus so that graduating seniors could pursue a college education within the campus. It was this time that the mascot changed from a Lion to the TARTARS (A Mongolian Warrior). The college was known for being “Adult” Tartars while the high school was consider “Baby” Tartars.

In 1933 an earthquake destroyed the administration building, but this did not stop the growth of the students’ enrollment. By 1935 the building was reconstructed and Compton was back to the business of educating its students.

In 1953, due to the growth of the population with-in the school and the city of Compton itself, it became necessary to separate the high school and college facilities. Regardless, of the separation, the college “Tartars”, continued to wear Maroon and White, but the high school “Baby Tartars” changed to the current colors of Columbia blue and White.

The Baby Tartars have had many nicknames over the years: Little Tartars, Tartar babies, Babes, and “Tarbabes”, which so happens to be the most popular. Over the years, the face of the Tarbabe has dramatically changed.

In 1996 Compton High School celebrated its rich 100-year history of academic and athletic excellence along with its diverse population. Our accomplishments, character and pride went before us and that is what was and still is respected and associated with the Tarbabe. Celebrating our unique history inspires us as a people to make every effort to reach our fullest potential and to pull others along with us. Compton has had so many untold stories…successful men and women. Because we know OUR history, it’s THAT history that we proudly answer to… Tarbabes For Life!   Please visit our “Hall of Fame” Tab to see various featured Tarbabes… Click Here